5 Steps to Running a Great Volunteer Event this Mandela Day

GrowZA partner Tim Abaa from Nectar farms runs a learning garden in Orange Farm, GP, South Africa While talent is universal, opportunity is not. Volunteering is a practical contribution to moving forward toward a more compassionate, tolerant, and unified country. Here are some practical strategies to consider when planning a successful volunteer event this Mandela Day. 1. Be clear on the “why” of the volunteer activity Why: As TED speaker Simon Sinek says, everything should s

GrowZA is founded on the principle of connecting development opportunities to resources in order to accelerate social progress. Traditional Corporate Social Responsibility programming, while commendable, often falls short of delivering authentic impact. Our partners and clients have joined us on the progressive social investment platform underpinned by the CSR 2.0 movement. The transition To compare the original form of Corporate Social Responsibility (CSR) to the new potenti 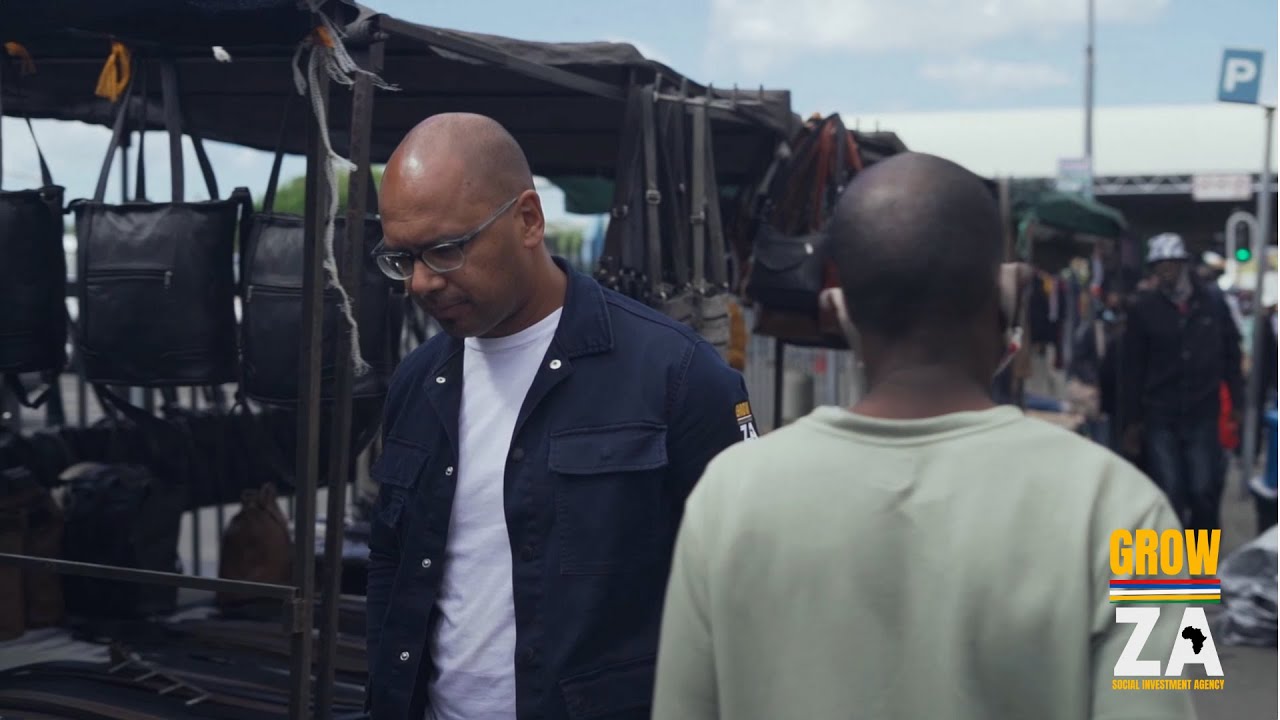 In June 2022, GrowZA celebrates 2 years as a formally registered South African Public Benefit organisation. Time has flown and our work has taken us across the continent and spawned projects we are incredibly proud to support. Some milestones include: - Establishing a powerhouse Board of Directors - Expanding GrowZA operations to Kenya and Egypt - Partnering with EPL champions Manchester City Football club - Producing a bestseller children's illustrated book (20 000 copies so

The SA Youth Water Prize finals (SAYWP) is the culmination of a year-long programme by Department of Water and Sanitation (DWS) and its network of regional coordinators, teachers and parents to seed, nurture and showcase innovation in water treatment and conservation by the young people of our country. The programme plays out across the 9 provinces with provincial champions emerging as finalists for the national finals. This year, with partners including the National Departme

Earlier this week, a producer friend of mine called to coax some content out of me for a local TV show. The brief - come and talk about how citizens can get involved in their communities this Mandela Day (18 July by the way). These are the notes I wrote in preparation for the interview. HOW TO MANDELA: Influence Leverage the influence you have at your place of work. If you are in a somewhat organised workplace, chances are there is a pocket of resources allocated for "charity

We are proud to be connected to the contractors and professional team who took it upon themselves to repair critical infrastructure to connect communities and jumpstart local economies. At the end of June 2022, the team rolls on to a local school in Inanda deepening the partnership with GrowZA to accelerate social progress. This is how we #GrowZA Download the most recent situational analysis of the emergency relief context in Kwazulu Natal compiled by the International Federa

After 2 years of pandemic-induced lockdowns, there couldn’t be a better time to appreciate the creative economy and its ability to generate jobs in the African market. In response to the United Nations marking 2021 as the International Year of the Creative Economy for Sustainable Development GrowZA adopted the principles of the UN resolution A/RES/74/198 to launch the GrowZA #Creativedevelopment scholarship programme. Recognising the challenge of access to technical skills tr

Seeds not Weeds - the currency of negativity

I have long maintained that it requires only a limited amount of talent to frame a problem writes Craig Kensley, director of #GrowZA Offering solutions build frameworks and implementation know-how is much harder (and a more worthy cerebral pursuit in my opinion). We should be weary of commentators who only have a problem definition to offer. Don't get me wrong, I enjoy a good doomsday narrative as much as the next citizen and of course, the media is fuelled by this. Failed St

Originally posted on the CSRNEWS SA site BEST NGO: Reach for a Dream Foundation BEST RISING NGO: Play Africa BEST SOCIAL ENTREPRENEUR: Next Generation BEST CORPORATE: Coca-Cola What a night! What a wonderful bringing together of the best and the brightest in CSI. The inaugural South African CSI Legacy Awards, held last night at The Venue, Summit Place, Pretoria, had a wonderful warmth and ambience to it, created by a room full of dedicated professionals who have really gone

Simply put Environmental, Social, and Governance (ESG) criteria are a set of standards for a company’s operations that socially conscious investors use to screen potential investments. Environmental criteria consider how a company performs as a steward of nature. Social criteria examine how it manages relationships with employees, suppliers, customers, and the communities where it operates. Governance deals with a company’s leadership, executive pay, audits, internal controls

Partnership showcase with CPUT leadership, Industrial Development Corporation and SIyavana Solutions Petrochemicals Many have argued that innovation is a fuzzy concept, used so often and in so many different contexts that it is now hard to know what we mean when we say innovation. We are pragmatists first, and so GrowZA defines innovation as the use of evidence-based and collaborative approaches to accelerate social progress as expressed in the SDG's and to find creative solu

It’s tax season and the pressure to optimise your tax return is on. GrowZA is a registered section 18a Public Benefit Organisation assisting businesses with a simple tax donation process to optimise their tax portfolio while growing South African communities. Your donation is 100% tax-deductible as an expense against your business income, which means you can claim it back on your taxes. FACT: South African businesses (and individuals) can redirect up to 10% of their tax burde

Dear friends All we want for Xmas is you :-) This started out as letter to our board to thank them for the support over the past year and for the commitment they have shown to the mission of GrowZA. As the cursor blinked in anticipation of the opening sentence I realised that the audience is much broader and that we owe a debt of gratitude to a number of people and organisations that have made this year the success it has been. Please don't expect a list, you know who you are

The Cape Town Global Action Plan for Sustainable Development Data is the basis of the partnership between Statistics South Africa and GrowZA and was informally launched at the first UN World Data Forum on 15 January 2017 in Cape Town South Africa, and adopted by the United Nations Statistical Commission at its 48th Session in March 2017. The Action Plan is referenced in the Resolution on the work of the Statistical Commission adopted by the General Assembly in July 2017 (RES/

Written by GrowZA Founder - Craig Kensley 22 November 2021 As the Covid-19 pandemic hit in early 2020, I found myself in a position coordinating the emergency response of a group of progressive corporate donors and foundations to the blunt force trauma inflicted on communities. Food relief, sanitation and GBV programmes rolled out at a pace never before required and stress-tested all the systems at civil society's disposal. As the response rolled out and we consistently engag

Brussels, 2 November 2021 The governments of South Africa, France, Germany, the United Kingdom and the United States of America, along with the European Union, have today announced a new ambitious, long-term Just Energy Transition Partnership to support South Africa's decarbonisation efforts. The Partnership aims to accelerate the decarbonisation of South Africa's economy, with a focus on the electricity system, to help it achieve the ambitious goals set out in its updated Na

Ratang Bana - an oasis in the heart of Alexandra, Gauteng

The tenacity required to consistently serve a deepening pool of need in a community is a rare commodity. The founder of Ratang Bana, Ingrid Moloi and her team muster this resource joyfully attending to the needs of hundreds of children and their families everyday. The faciliity is truly an oasis where the community can come to rest, play, eat and receive social services including counselling, training and jobs. Identified through the GrowZA network as a community keypoint, th

On Sunday 31 October 2021 Social Investment Agency - GrowZA, Water solutions company Xylem inc, Cape Town beach cleanup and sports development NGO Goals for Change partnered to kick off a dynamic partnership between Xylem inc and Manchester City Football club on Blouberg beach in Cape Town, South Africa A highlight of the day was the presence of the Manchester City Supporters Club South Africa who pledged support for the African rollout of the programme. The day kicked off wi

Written by Craig Kensley This morning I posted a picture I had to have taken for an awards programme I am involved in. An amazing young photographer Auriol Daniels - check out the amazing work they put out - came over to take the pics and we played around with backdrops. We were consistently drawn to an amazing artwork we have displayed by the prolific Linsey Levendal (a Capetonian visual artist based in Canada). What makes this artwork particularly unique is the process thro